We played a 6-player version of the game yesterday with our newly-designed cards, player mats, etc. and found that the Kinds were able to attain victory in 3 short rounds with a quick 3-Diplomacy wins win. Kathie Kindred was in play and so that ended it in what felt like no more than 20 minutes.

Truly a quick-playing game, we continue to have fun with it. Feedback from play testers on the design lauded our inclusion of trait legends on the Neighbor Cards and mats for easier reference. In addition, the change in card size (down to micro) for Clue and Action Cards while keeping Neighbor and Situation Cards at their original size (poker) was deemed to make sense and met with approval.

It’s got a cute little “fantastiqal” theme that I could see children swallowing. I can acknowledge that cuteness though I boiled it down to why spatulas were somehow being used to subdue monsters of unusual size and such… 🙂 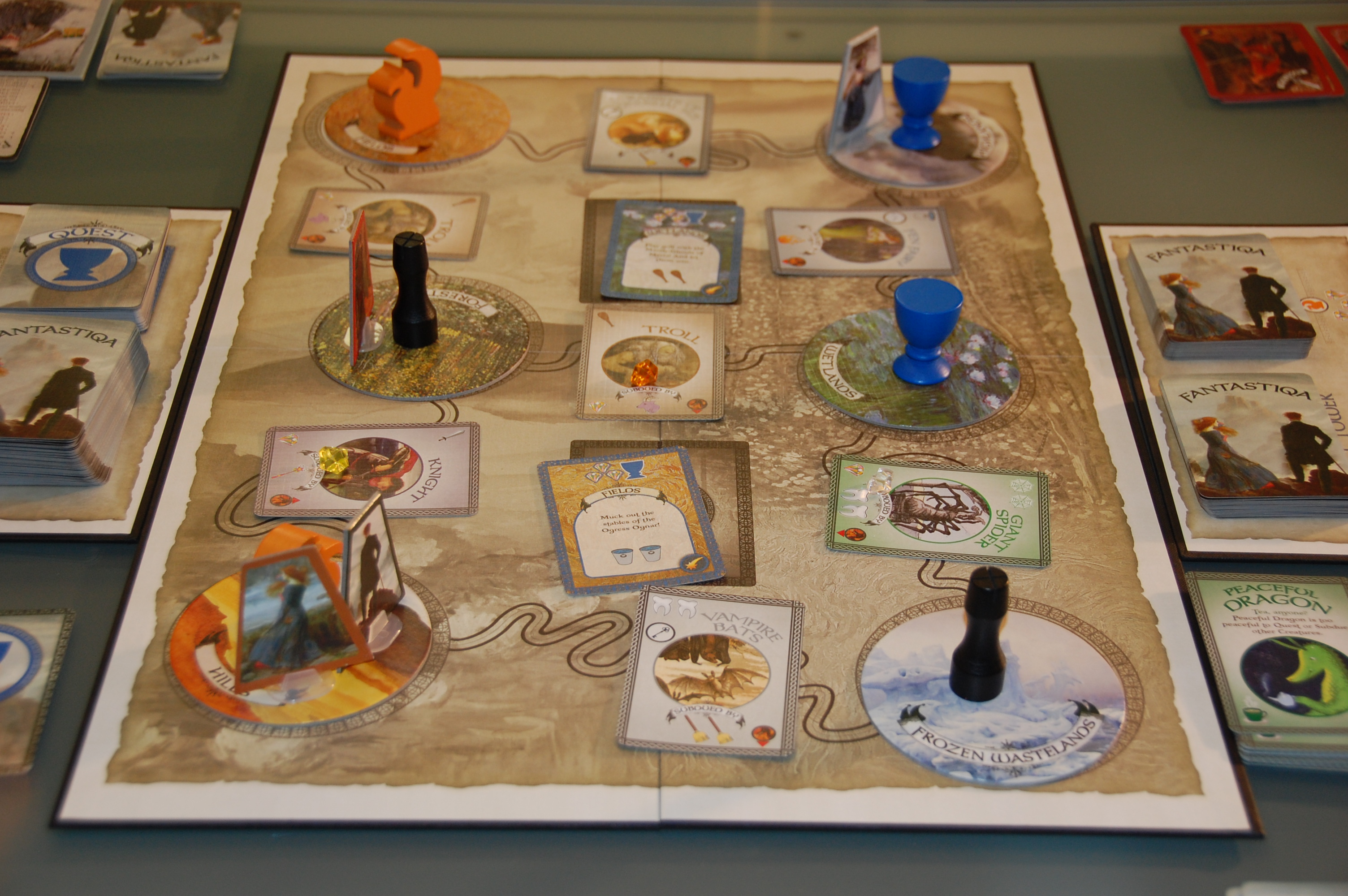 The Game’s Objective
The objective is to collect a certain number of points which is based on how many people are playing and the approximate duration of game you’re looking to play. One thing to note, when 4 people are playing, you’re encouraged to play as 2 teams of 2 (alternate seating) so that points can be combined and the win condition is met a bit faster. We didn’t quite catch that and we played a fairly lengthy individual 4-player game.

And it was still fun. Once we realized it would already be over we continued playing it individually to get a winner based on how we started.

Setup Comments
One the one hand, there are a lot of components and cards and it almost looks as if it’s going to be quite a hassle to set up. On the other hand, anyone who’s set up Mage Knight can get through this in a snap! 🙂

It’s actually not that hard once you get a handle on the many decks of cards and notice that the card icons tell you exactly where to put the shuffled decks. There’s some assembly of individual decks (the cards you start based on the chosen character image, a dog that finds you gems, a peaceful dragon which is just a waste card and a to-be-selected artifact). With some flying carpet tokens and deck reshuffling tokens you’re on your way.

Game Play
You have 5 cards in your hand that are active for your turn and you can perform free actions (using a card’s power which is determined by a few icons OR using flying carpet tokens to move beyond monsters w/o encountering them). Then you perform one action for your turn which is either adventuring (which means using cards to subdue a creature and move beyond it) or encountering the statue in your space or completing a quest in that space.

If adventuring, you can subdue a creature and repeat that for as many cards as you have that can subdue adjacent creatures in your path. Subduing creatures is done by matching the weapon type of your cards (top left corner) to the “subdued by” type-image(s) on the bottom of the creature (or quest) card.

Every creature subdued in this manner get added to your deck for later use and moves you ahead to the next position on the board. That adventure+move mechanic is what lets a player have a chain of subdued creatures in a single turn.

In our game, depending on what’s out, some got lucky and were able to subdue 4 creatures in a turn and there were some turns where no one had the cards to subdue anything near them.

Once we got the rhythm going, we could complete turns fairly quickly without a lot of downtime in between turns.

Problems
For once, I don’t believe I had any problems with this game at all. Things seemed clear and I was able to answer any questions that came up with relatively quick reviews of the rule book. That’s truly a big thumb up!

Ultimately, my rating for this game is: Very Good

Why not Awesome? It’s fun and I’ll play this often whenever we’re only a group of 4 people or fewer but it’s a little kiddy to me. I’d probably rate it as Awesome if it accommodated 6 people (the size of my regular gaming group) and that might make me discover more about it… or if it were just a little more… exciting? Not sure.

Josh and I are signed up for ConnectiCon and will be bringing copies of Do You Know Your Neighbors? and possibly some really-proto prototypes of Fantasy Turf Wars to get them play tested by the masses.

If you’re interested in seeing and playing our game(s), join us there.

Note: we’ll likely add a date or two for shows in February and/or March 2013 as well.