Summary
In brief, the warnings about the time commitment to play this game are all completely true. This was hard to believe prior to playing the game the first time. Everything on the net warns of 4-hour games and there’s even a 3-hour learning curve on top of that while trudging through the first scenario — the one they call short for people not yet familiar with all of the rules. And there are MANY, MANY rules!

That crazy time commitment aside, the game is quite enjoyable once you’ve gotten around the complicated game mechanics and the setup. 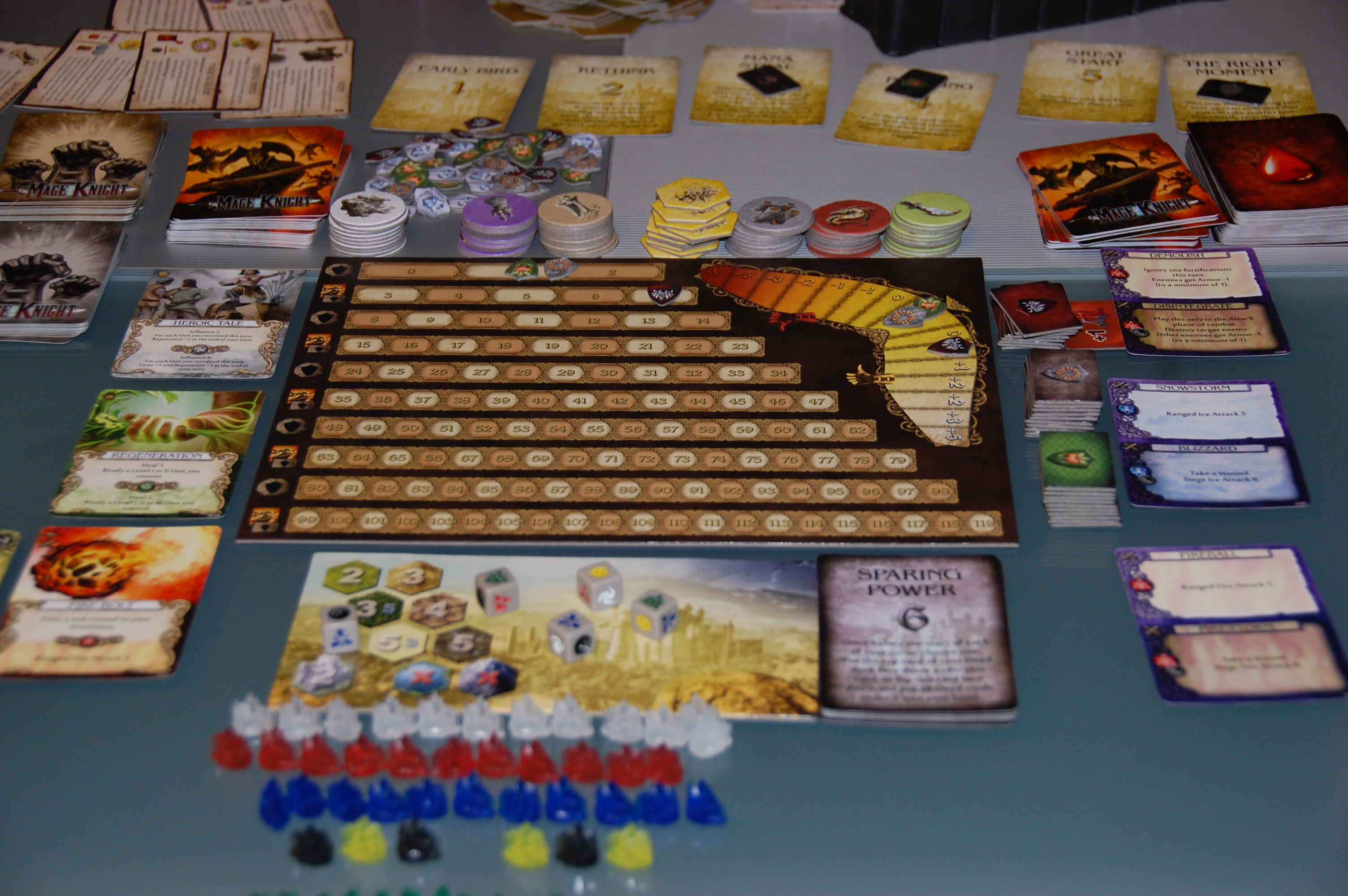 The Game’s Objective
Mage Knight has several different scenarios that are available, some cooperative, that can be played. The objective is based on the chosen scenario.

The suggestion for the first game – or any game including people unfamiliar with the rules – is First Reconnaissance. For our first game, we played this scenario with 3 players. With the setup, consternation over the 2 20-page rule books and a switch to watch YouTube videos that reviewed the game and discussed combat, etc., we were at this for almost 7 hours.

I kid you not.

However, the good news is that for our second game (a few weeks later) we played Blitz Conquest and we completed the first portion (day) of a 4-portion scenario in under an hour. And the setup was amazingly quick given the first game’s introduction to all of the parts and such.

We stopped playing after ~4.5 hours and were roughly 75% of the way through the scenario.

Setup Comments
The first time we played, setup just seemed to take forever. Part of that, I will admit, is our fault. Their Game Walkthrough book has all of their cards displayed and it gives you the key to determine which of the cards (most with the same card back) is what type of card. They all have the same card backs because they can be acquired as resources for individual decks and should blend in.

The cards themselves are actually pretty packed with information and coded in a way to have all of the mechanics on them. The same is true for the monster and building tokens. The problem is trying to memorize all of the symbols or getting comfortable with quickly looking them up.

The 2nd time we played this game, I had the game setup in under 15 minutes.

Game Play
The game is broken down into rounds (day or night) and individual turns within that round. Depending on the scenario there are a number of rounds that describe the time limit by which some objective must be met.

That brings us to combat. There were some complaints around combat around the table as we were playing. And it is definitely a different set of mechanics combining the opportunity to have ranged attacks occur first (and repeatedly if PvP). Depending on what cards you have and what sort of combat is happening it can be very different.

Essentially, that’s it. You do those basic mechanics while trying to accomplish whatever objective is laid out in the scenario.

Problems
I think one of the problems with this game is the potential to suffer game fatigue. This game is definitely geared toward a hardcore gamer and even then, if you fail your (personal) fortitude save at any point during the day while playing this game the play time can easily be artificially extended due to failing to pay attention, inserting breaks, playing Gems on an iPhone, etc.

Additional Analysis
I reserve the option of adding something here after playing this a few more times.

Ultimately, my rating for this game is: Very Good