Weird Game of the Day: ‘Spin The Bottle’ 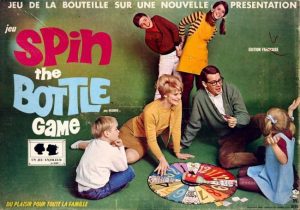 This game almost flew under my radar. After all, what’s so new/different about spin the bottle? It’s been an angsty teen house party game for decades. However, this is the Spin The Bottle board game…for families of all ages. Published in 1968 by Hasbro. Now I want you to think about this for a moment. Spin the Bottle. “Fun for the whole family.”

This is a game for 2-8 players that are randomly paired and forced to do stunts for points–a majority of which involve kissing. Now if the concept of this “family” game isn’t weird enough–I ask you to closely inspect the cover. 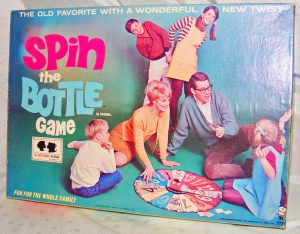 Here we have 2 creepy teens doing god knows what in the background and are likely brother and sister.

We have two parents oggling their daughter. IF they are in fact her parents, since he is wearing a wedding ring and she is not.

Then we have little Tommy in the foreground who is so distraught by the rest of his family that he couldn’t tuck in his shirt and now his tidy whities are exposed for all to see. In his defense, maybe he got this card: 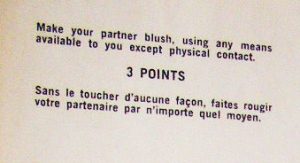 I can’t wait to play this with my family this weekend. Then maybe I’ll bring it to school and share with my teacher and classmates. I’m sure grandma and the nursing home would enjoy it too.