Summary
Cray Cray Games was a Kickstarter backer of Monolith, by Goblin Army Games.  It’s a shockingly themeless (I don’t think this game necessarily needs a theme.) strategy game of chance. The oxymoronic description is intended as dice-rolling is the primary mechanic.

The game can definitely be played in the 30 minutes it states on the box, but everything’s dependent upon the kinds of people with whom you’re playing.  Hemming and hawing on die placement and/or Skill Card use is still not instantaneous.  🙂 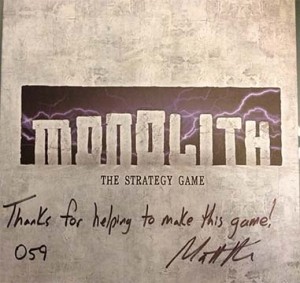 The Game’s Objective
The objective is to get to the Victory space on the score track.  Failing that, being furthest on it achieves victory.  Roll your dice and try to place them in the areas that will earn the greatest amount of Victory Points or that set you up to gain resources like Gems, Skill or Power Cards.

Setup Comments
This is pretty quick, especially if you keep your cards in their categories (Skill, Rune, Fate, Power, etc.).

Get out the dice and tokens that correspond to a player’s chosen color and 5 gems per player to make available for the game.  Set the playing field (11 Rune and 1 Fate Card) for the game.  Determine who gets the Primus Token (aka: first turn token) and you’re ready to begin.

FYI: There is a 5-card hand limit (mentioned inconspicuously on p8) for Skill (plus Power, if in play) Cards . 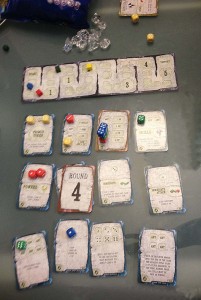 There’s a lot of potential for re-playability given the numerous Fate and Rune Cards.

Ultimately, my rating for this game is: Playable (As Is)