Tag Archive for Nuns on the Run review

Review by Josh: Nuns on the Run 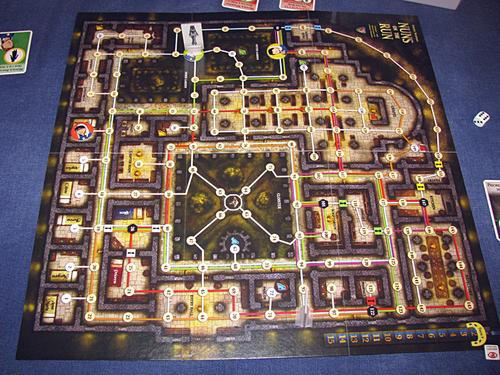 Nuns on the Run board game

A big shout-out to Fréderic Moyersoen, the game’s creator, is in order. I think Nuns on the Run is a very unique, ingenius concept in its design. I wish the execution of it had been tidier. Let’s take a look.

Nuns on the Run is essentially a game of Hide-And-Seek with a big twist. The twist being that most players will be novices on a mission to scour an abbey at night to find a key that will unlock the door to their “secret wish” and then get back to their bedroom without the 2-woman team of nuns catching them. 1 or 2 people will play the nun guards while all other players will be a novice. Novices are all given a set of identical movement cards ranging from running to standing still. They are also given a Secret Wish card which they must achieve before the end of the 15th round of play. The Nuns are tasked with preventing any novices from achieving their secret wish, or by catching as many novices as there are players in the game.

Novices will begin in their respective bedrooms and each turn they reveal face-up a movement card of their choice. They do not actually move a physical piece around the board however. They write down the corresponding number of the space they land on, onto a secret movement tracker pad provided in the game. After they record their movement for the round, they must roll a die. The higher the die roll, the louder the novice was when moving this turn. If they are within a die roll’s amount of spaces from a guard, they must put down a noise token in the general direction in which the guard heard a noise. Slower movement cards (such as sneaking as opposed to running) will decrease the noise die roll by a given amount. So, players can move slow and steady but risk not attaining their wish, or they can go faster but be at a constantly higher risk of being heard.

In addition to making noises, novices also have to worry about being “seen.” If at anytime a novice is in a guard’s line of sight, they must put their face token down on the board where they were spotted. Guards can “catch” a novice by landing on their face token—thus stealing their secret wish away and sending them back towards their bedrooms. Until a guard sees a novice or hears a novice, they are forced to walk along pre-set paths according to route cards and corresponding color paths on the board. On the guards’ turn, even if novices are out of sight and aren’t heard making noise, the guards still get to make a listen roll—which works the same way as noise-making but without the movement/sound modifiers involved.

I would love to give this game a higher score because I love the original concept so much. I think it’s great that 8 people can sit around a board with 2 nuns chasing misbehaving novices around in secret. It’s just so odd and eclectic that I have to smile. And truly—in the right group this can be a very fun game. If you have someone that is good at playing the guards and really giving the novices a run for their money—it gets competitive, tense, and funny.

However, this game suffers from a lot of ambiguity in rules. If you don’t mind sorting a lot of them out for yourself, then I still recommend this game. There are others that will be entirely put off by it and don’t want to expend the effort in sorting out a published game. I can certainly see both sides of the equation.