Weird Game of the Day: ‘Shmo’ 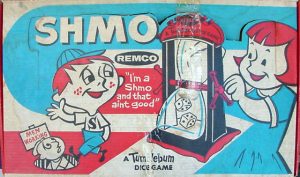 This. Game. Is. Fascinating. I don’t know what the backstory behind it is, but I proudly present to you: SHMO by Remco in 1959. With the tagline “I’m a Shmo and that ain’t good” it seems to be a game about proving who is the biggest shmo. Here is a copy of the rules and a description courtesy of boardgamegeek:

Each player is provided a “Shmo” marker (a plastic boy in short pants) which is placed onto an oversized board. Players roll the dice and move along a path containing such features as “Forgets his trousers…”, “Takes wrong school bus…” or “Walks through wet cement.” Each special feature directs the player to advance a number of spaces and pick a “Shmo card”. The cards direct the player to perform some silly act and declare himself a shmo (Scratch your back 10 times and say, “I’m an itchy shmo!”).

At the end of the path is a large box declaring: “First one here is a SHMO… …and that ain’t good!” 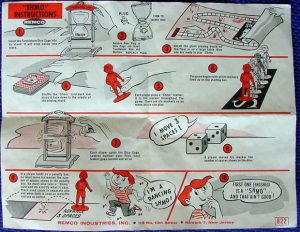 So…what is a “shmo” exactly? I have heard of the word in the context of “Average Joe Schmo” for example, but of course the spelling is different and I wanted a clearer picture.

Dictionary.com says: a foolish, boring, or stupid person; a jerk.

Mirriam Webster says: an ordinary person who is not interesting or unusual in any way.

Oxford Dictionary says: a stupid person; a hypothetical ordinary man; a variation of ‘schmuck’ originating in the 1940’s.

Schmuck eh? Now we’re getting somewhere. What does our know-it-all Wikipedia have to say about that?

Schmuck in American English is a pejorative term meaning one who is stupid or foolish, or an obnoxious, contemptible or detestable person. The word came into the English language from Yiddish (שמאָק, shmok), where it has similar pejorative meanings, but where its original and literal meaning is penis.

I knew it! It always comes back to the penis. This is a penis game for kids. I approve. Enjoy!