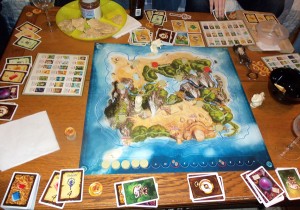 Nachos and booze not included.

Isla Dorada is a game that flew past me unnoticed. Surprising, as it is another top-quality production from Fantasy Flight. Here is a quick overview of the game with my personal take on it.

The premise of the game is that each player is an explorer on an island who is seeking out the greatest number of treasures and goodies. The player with the highest point total accrued from treasures and the like, wins. The catch is that explorers must travel together. You can’t go off on your own. A totem pole pawn will be placed at a base camp site on the middle of a pretty board, and this will represent everyone’s movement from place to place.

Each player will be dealt a combination of cards:

Destiny Cards: These will have secret objectives on them that you will want to achieve. They range from, say, “Explore X number of areas” to “Explore these specific areas” to “Get this many treasure cards” or “Make sure nobody travels by sea” They are varied and very interesting cards—all with various point values associated with the successful completion of each. Players will initially be dealt 2 of these, keep one, discard the other.

Curse Cards: The reverse of Destiny Cards really. Each player will be given one of these. Instead of awarding you points for an objective, they are deterrents. They will instantly give you negative points of you travel to “X” location.

Treasure Cards: These are cards with various pretties on them along with a point value and location. If you can sway the explorer totem to land on said location, you get to place the treasure card infront of you and are awarded the point value. You will be given 3 of these to start, of which you choose 2 to keep and discard the remaining one.

Adventure Cards: These are the meat and potatoes of the game. Primarily they serve as the “currency” with which you influence the movement of the exploration party. There are also some treasure cards mixed in and some event cards that range from giving curses to other players to drawing more treasure or destiny cards. Players start with 6 Adventure cards.

Players also start with 10 gold coins…but contrary to intuition, these are not really the main currency. They are a fueling mechanism for certain Adventure cards that require you to pay for their usage. They aren’t used for any other purpose and players will never have more than the 10 gold they start with, and they don’t even need to use any gold throughout the game. If you don’t use gold to fuel adventure cards, you get 1 point at the end of the game for each gold unspent.

Now, onto the game!

It consists of 16 turns, which are indicated by a turn track on the board. Everytime the explorer totem moves, a disc from the turn tracker is removed and placed on the traveled-to location.

On each of these 16 turns, there will be several phases:

1. Bidding phase: Bidding is how you earn the right to move the explorer totem. Bidding is done entirely through the use of Adventure Cards. Most Adventure cards will have a symbol on the top-left indicating a terrain type (desert, mountain, water, jungle). For each symbol of a type, you may bid “1” to move the totem along a path of that corresponding terrain type. If you have 3 yaks, you can bid 3 to move along an adjacent mountain path. There are other cards that allow for long range travel with the use of gold coins. There are also cards that alter terrain type on cards. Those special cards aside, this is essentially a bidding war of “who wants to go in what direction the baddest?” If you are adjacent to a location where your Curse Card will initiate and cause you to lose 6 points, then you are really motivated to bid in the opposite direction. Conversely this is true for people with Treasure Cards or Destiny Cards that will want to go that direction. The tug of war bidding goes clockwise from the leadership token (possessed by the youngest player to start, and later by the winner of the previous bid) and goes until nobody can outbid the highest bid, or simply passes.

2. Movement Phase: Now you simply move the explorer totem to the bid-upon spot. Place a disc from the turn track marker on this spot to indicate it has been traveled to. Anyone with Treasure or Curse Cards relevant to the current location should now immediately place those Cards infront of them face-up. These will now officially count towards point totals at the end (whereas if they remain in your hand, they do nothing).

3. News Flash Phase: This will only become relevant on turns 4 and 9 (as indicated by red discs instead of beige). On these turns, players will get to draw additional Adventure Cards and choose one or more to keep.

4. Adventure Card Phase: Regardless if you spent money in the Bidding Phase or not, all explorers starting with the holder of the Leadership Token will get to draw 1 Adventure Card. This can either be from the top of the deck, or from the 4 Adventure Cards currently showing in the face-up pool. If one of these cards is chosen, another is immediately flipped to replace it.

Rinse. Repeat these phases until the end of turn 16. Count up your points, including the reveling of any points achieved from Destiny Cards. A winner is declared. Woot!

I liked this game. Everyone I played with liked this game. Nobody loved this game. I would consider it a good, quick game to bust out every once in a while to play. It’s likely that everyone will enjoy it and nobody will complain or cringe if its box is pulled from the shelf and placed in front of them. The rules are pretty straight-forward and I find the mechanics interesting. More importantly, it was just an enjoyable, light-hearted game.

In Mansfield, MA from February 21-24, Total Confusion 27 shall be running and Cray Cray Games has spots on Saturday and Sunday to showcase prototypes of their current games.

There’s sessions for both:

Hope to meet folks there and get potentially interested parties for our future Kickstarter projects.